From The Archive: Touring The Formosa

April 27, 2019by Coach Matt in Uncategorized 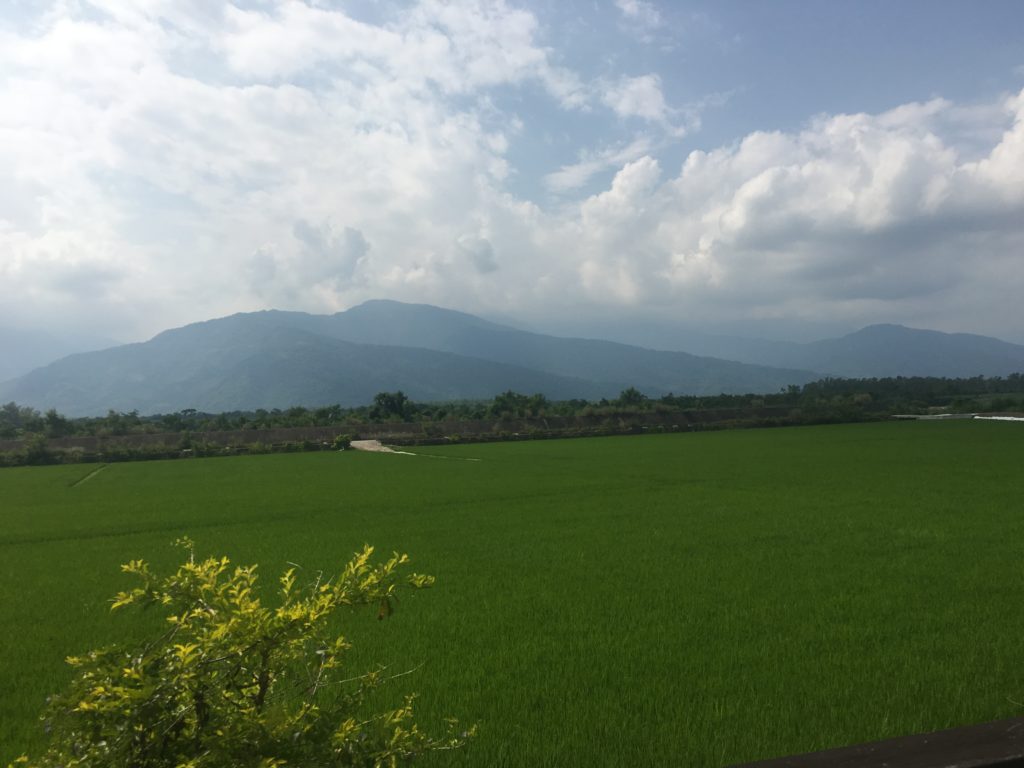 This was in Pez awhile back. I’m posting in honor of a friend who recently enjoyed Taiwan cycling for the first time…

In the fall of 2015 I was in the final preparations for the Taiwan KOM Challenge. At the time I had not been to Taiwan and was terribly excited at the prospect of riding this most daunting of events. One unexpected benefit of going to the ride was the chance to explore a few of the other roads on the Island, so you can imagine my excitement at being invited back to Taiwan this past August to ride a whole new part of the island.

Giant bicycles in conjunction with the Taiwan Tourism Bureau hosted a small cadre of journalists for a week that included roughly 400 kilometers around the Southern end of the island from the industrial port city of Kaohsiung on the West to the vacation hot spot of Hualien, on the Eastern coast. We would largely follow the Southern route of the popular “Formosa Challenge” a 900 kilometer circumnavigation of the full island undertaken by hundreds of local Taiwanese and a growing number of International cyclists each year.

One of the great joys of riding in Taiwan is the ready availability of grandeur. The Portuguese named the island Ilha Formosa, or beautiful island, and in a country of some 23 million people it is surprisingly easy to find yourself alone on a deserted road, feeling like you are miles and hours from civilization, yet surrounded by natures glory. Gorgeous views abound making it easy to stop for impromptu photo sessions around nearly every bend. This is one of Taiwans secret gifts, the chance to slow down and ride for pure pleasure after a season of chasing fitness in the name of performance.

Heat, and it’s natural ally humidity, are the easy justifications for these photo op/rest breaks. Unrelenting is the only way to describe the heat of a mid day ride on most parts of the island. The sweat pours like water, soaking gloves, socks, helmets and clothing within minutes of starting any sort of focused effort. Salvation occasionally comes with altitude, and with over 260 mountains above 3000 meters, altitude is easy to find. But elevation is not the focus of this week’s riding, instead the route is traced on a primarily flat route that allows for both ample daily ride distance and the opportunity to see some of the cultural offerings of the island as well.

The first days route heads south and east from Kaohsiung to the small town of Checheng, which lies very close to the southern tip of the island and the nearby Kenting National Park. While the first hour is spent navigating out of the metropolis, the remaining kilometers are mostly on quiet roads with little traffic. 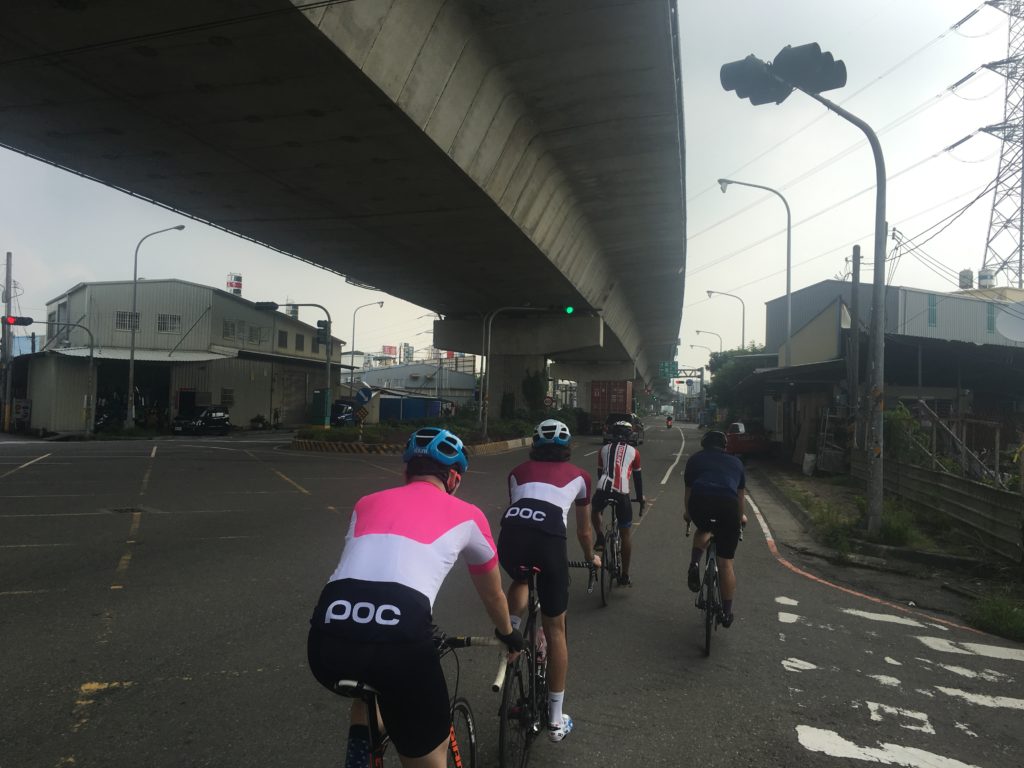 We stop several times along the way, reinforcing that it is not a speed tour, but one to be savored. Our first is for shaved ice in the small town of Chaozhou, a delicious distraction from the days quickly rising temperatures. 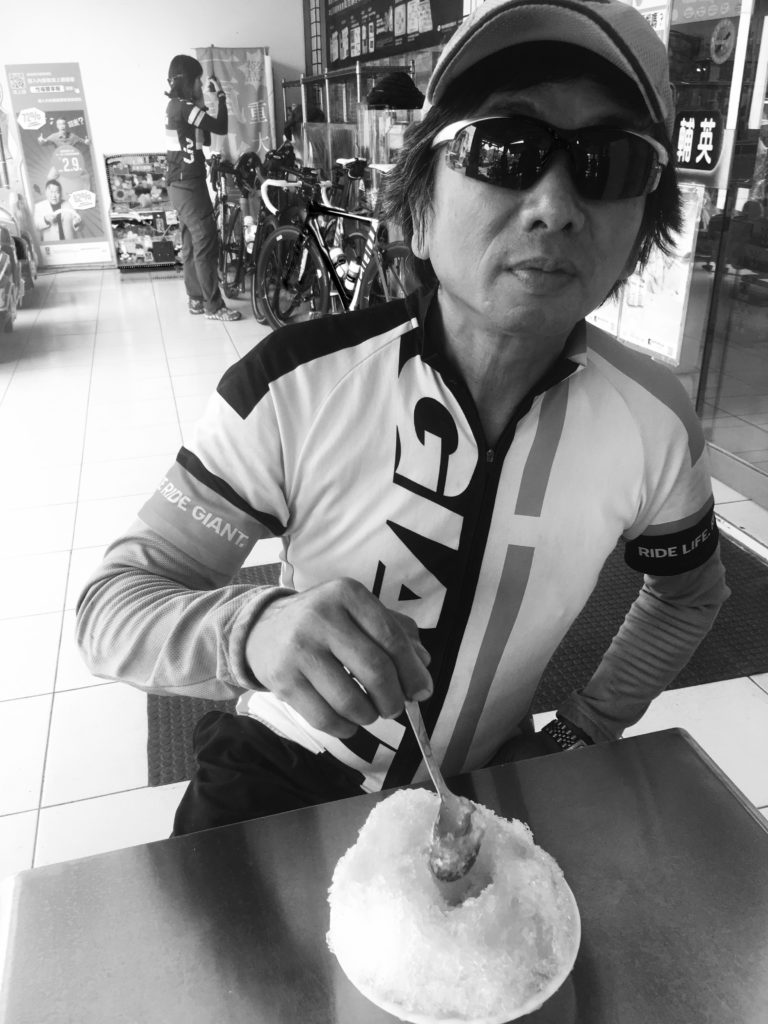 Lunch was taken at a roadside restaurant famous for its “ teapot chicken”, as fresh and delicious as any you’ve likely ever tasted. In concert with the company it was a purely enjoyable experience, capped off by one of my nearly infamous twenty three minute naps! 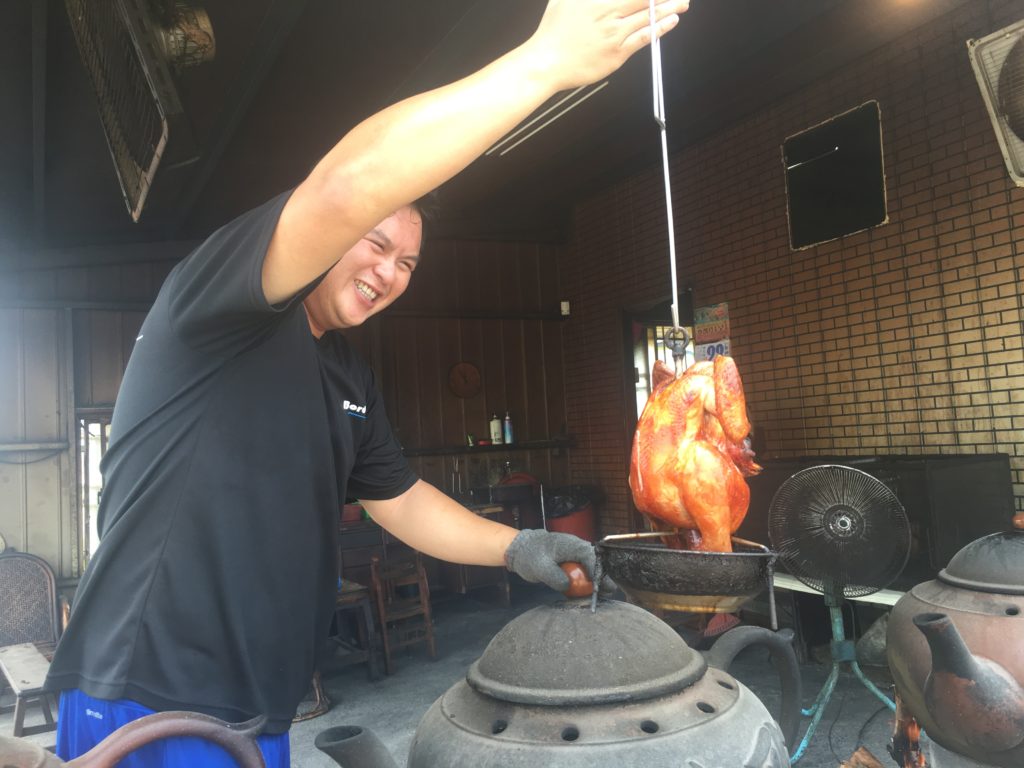 After lunch we settle in for the remaining kilometers until our destination, the seaside town of Checheng. We pass fields and rivers, roadside shops and houses. The drivers are polite, allowing plenty of space as they pass; not once did I hear a horn in anger or feel threatened during any of the days on the tour. The group, there are seven of us plus our guide, an always smiling, tennis shoe wearing, guy named Chic, rolls almost effortlessly along the coast highway before taking a quick side trip to visit the largest Buddhist temple on the Island. Fully five stories high and resplendent in reds and golds, the temple was a bustle of activity. Our cycling kits looked out of place as people lit ceremonial incense and made sacred offerings of paper “money” into the oven fires to bring good fortune to their families.

Day Two – Climbing Day!
County highway 199 is less a highway than a two lane black top through Taiwan’s past. It starts off on gorgeous pavement and quickly enters a modest canyon on a slight rise. It is here that you enter the realm of some of Taiwans original inhabitants, in this case the Paiwan tribe, representing some18% of the indigenous population of the island. The Paiwan, and other aboriginal tribes moved, or were more accurately pushed, to the higher inland areas starting with the Xing Dynasty in the 1800’s.

The move protected their culture and identity, both of which are on vibrant display as you cross the county. A perfect example of this is the Mudan elementary school, an award winning institution that serves a primarily aborigninal student population. It’s rainbow staircase and vibrant campus show the students and the outside World that here is a special place where education and tradition meet.

With a top elevation of around 1500 meters the 199 doesn’t appear terribly intimidating on this the “climbing” day of the tour. Still, and again, Taiwan proved a subtle mystery. This second day had 65 miles and an astounding 10,000 feet of climbing by the time we were done…nearly as much as the Taiwan KOM, but in a series of small inclines and descents through the center of the county instead of the constant and unrelenting route of the KOM.

The “highway” wanders up through a never ending series of bends and twists that make for a fun and enjoyable climb, and a chance to open the throttles a bit thanks to the modest grades. The 199 intersects with Highway 9, a larger and busier regional highway that is also a simple two lane road, albeit one loaded with big trucks delivering supplies to the cities and towns on the eastern shore. Winding our way thru a mass of slow traffic made for a fun, and perhaps ill conceived, descent as we strove to pass nearly every car and truck on the road. Once down, however, we were treated to a gorgeous Ocean view as we rode up the coast to Tongfashun restaurant for lunch, this one, naturally, a seafood spectacular brought to us thanks to the fantastic local knowledge of Aya Lee, our lead guide. After lunch it was a long roll up the coast to our hotel in Zhiben. 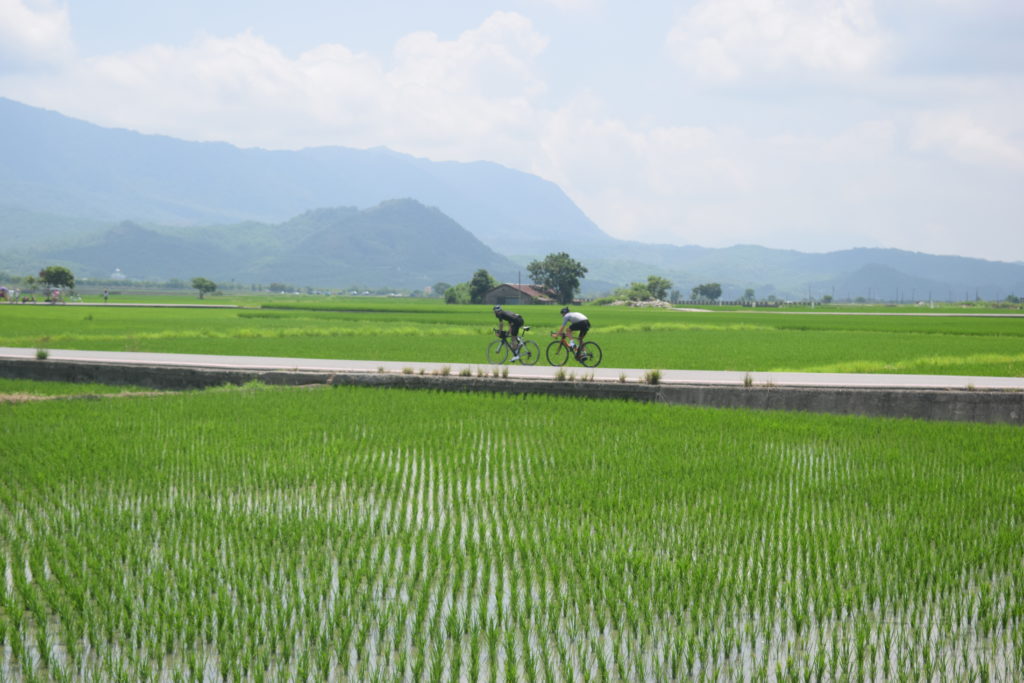 The Rift Valley runs along the eastern side of Taiwan for approximately 150 kilometers. It is the home to five of Taiwans aboriginal tribes and is also renowned for the quality of rice produced there, and the vast array of outdoor activities on offer. For cyclists it is an idyllic area that includes rural roads, spectacular views and the chance to straddle two of the Earths tectonic plates, the Philippine Sea and Eurasian plates. These things don’t happen everywhere.

This was the tableau upon which our third day was etched. To a rider we awoke tired, but enthused at the prospect of riding up the valley on yet another gorgeous day in what we all have come to agree is a cycling paradise.

The Finale
Our last day started at a quaint set of cabins on the outskirts of Ruisui, a small township off the beaten path, but perfectly emblematic of life in Taiwan. Eleven villages with about 12,000 people comprise the township. We had entered just before dark the night before, riding almost through the center of one town according to the map, but you would never know it as lush greenery seemed to cloak the buildings from view. The parking lot was dirt, just off a one lane road, and while comfortable and beyond adequate, it was hardly the “five star” experience that is so often sold to tourists by guidebooks and hucksters. Then again, Taiwan cycling is not built on five star luxury, but on five star experiences and a culture that makes visitors feel like family and we are cyclists, so the ride and the experience are what matters most.

It was the shortest of our days on the bike at 51 miles and a mere 1,300 feet of climbing, but the fourth day of the tour did not disappoint in both riding and experiences. Our first stop was the Fuyuan Forest park well known for its butterfly valley and home of the largest grove of Camphor trees in any Taiwanese National Park. It is also renowned for the cycling path that winds through the trees, although we missed it to push on. 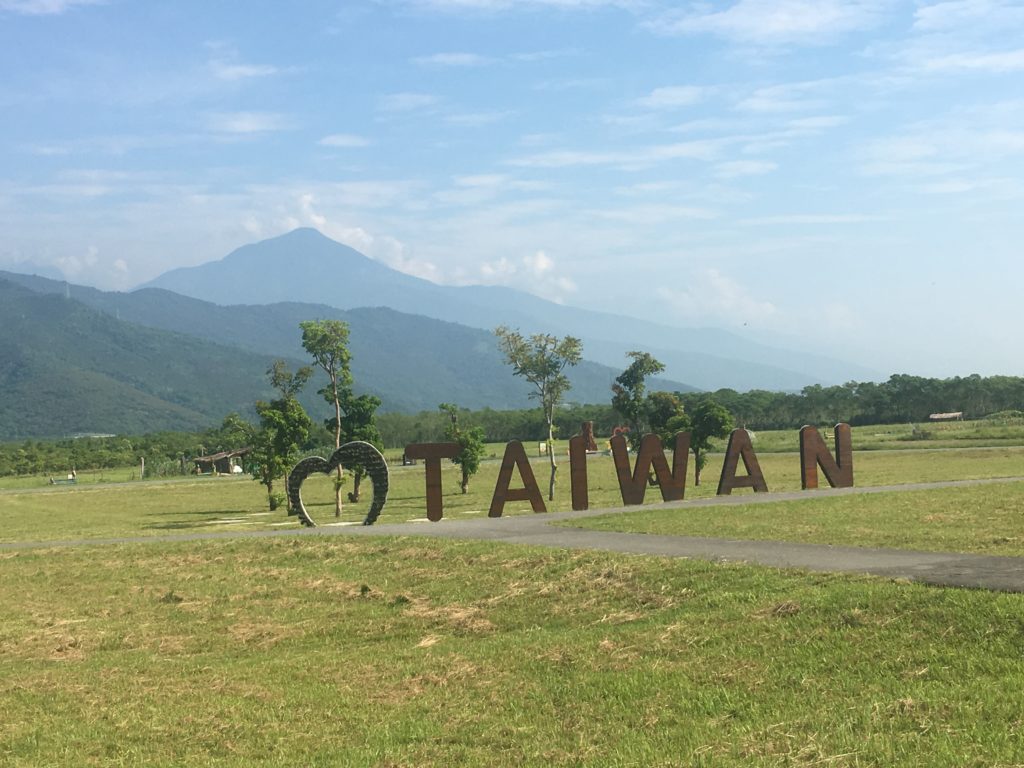 The trip was full of historical insights and locations, one of the most symbolic for me was the forestry center known as Lin Tian Shan. The fourth largest in Taiwan at the height of operations, Lin Tian Shan supplied wood to Taiwan across more than fifty years. A product of the Japanese occupation of Taiwan (1895-1945), Lin Tian Shan is now a historical center showcasing the diligent, sometimes forced, work of it’s roughly 2,000 inhabitants. The center has artifacts, tools and spectacular wood carvings that speak to the immense history of the area

From there it was a short sprint to the rail station in Hualien, our final destination. We pushed hard in these last miles, the pace mostly above 20 miles per hour. It was a physical strain but an mental thrill to roll quickly across the flat pavement alongside new friends of equal measure on the bike and off. Our dutiful guide Chic had come quite a long way as a rider over these past days and took his turn rotating on the front like a seasoned veteran, still wearing simple tennis shoes. As a group we were so impressed by this young man that, while waiting for the train back to Taipei, we visited a local shop and happily bought Chic a set of proper cycling shoes and pedals as a thank you for putting up with us over the course of the week. To a participant we agreed that Taiwan is a wonderful cycling destination and all plan to return as often as we are able to enjoy ever deeper appreciation of this beautiful island.

« PreviousTouring The French Alps
Next »Ouch, A New Start…