The Team That Wasn’t

December 27, 2020by Coach Matt in Uncategorized

“I want to get on a really good team next year!”

Race bikes long enough and you’ve heard, or more likely said these exact words. Cycling is great because it’s aspirational – we all aim to ride better, faster, longer, and against better and better competition. That process is one of the main reasons, in my opinion, “roadies” are so elitist. Move up a category or two and suddenly, somewhat deservedly, you feel just a bit better than the rif raf in the category you just left. Then again the skills and speed required to “do-what-we-do” is also a legit reason to NOT want to spend too much time in close proximity to folks with less skill, experience, and awareness. There I said it – I’m roadie scum!

I started slow in racing. My first summer as a 16 or 17 year old I think I entered maybe two or three races (?). The only one I remember was a Junior Stage Race that included the Colorado contingent of the 7-11 Junior Team (the LUX of the time), home to Pete Stubenrach, Troy Miller, Clark Sheehan, and a bunch of other little badasses. I got my butt kicked, every stage. 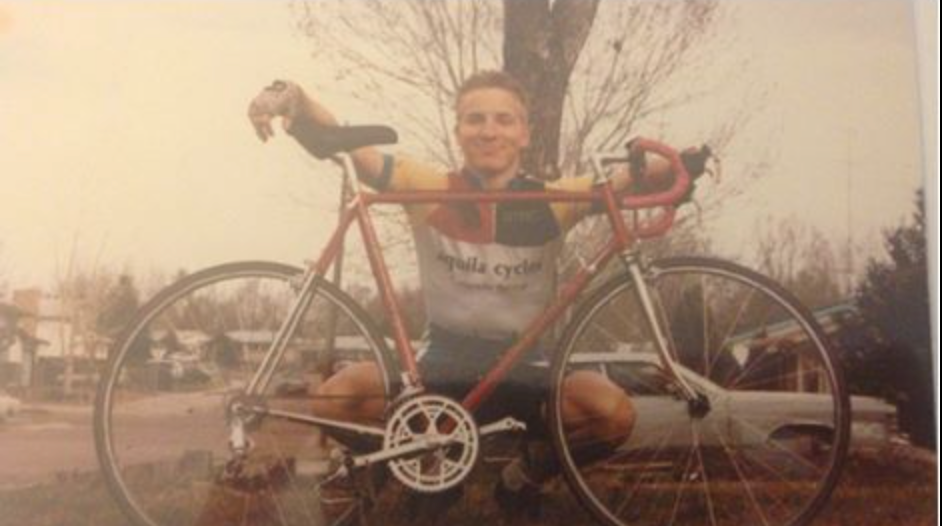 Fast forward to 1989, all of 19 then, and in February I had moved to Tucson, Arizona to “get serious”. Six months of riding and training with the fine folks on the Gilmour Cycles team and I’d won my first race, podiumed a few others, and was on my way. Got my Cat 3 upgrade in July at the Longmont Criterium and then got my Cat 2 upgrade the next year at the same race (so technically from 4 to 2 in a year! lol… 🙂 )

In the fall of ’90 me and a couple of friends heard about a “legit” team being set up by the friend of a friend and he was having a try-out. Ding ding! Our big chance. The try out consisted of a time trial and road race on the famous Morgul-Bismark course outside Boulder. I don’t recall all those in attendance but for sure it was other up-and-comers like my buddy Chris Teufel and quasi nemesis Bill Ossofsky (he was always super strong, so naturally he sucks right? He’s actually a pretty good guy). I made the cut, I think there were 6 or 8 of us total. Next up we had a team meeting at the guys house – pretty sure his name was Bill and it sounded awesome. We’d have team bikes from Serotta – he had a gorgeous Purple and Evergreen painted one that was our “team edition”. We had some great training rides, including one night ride crit practice near Wash Park that was actually super productive and fun. We were all pretty new Cat 2’s and ambitious to put our mark on the Colorado scene so this was a really great opportunity.

It was all an egotistical fuck you by this guy Bill. Why he thought putting together an imaginary team was a good idea I’ll never know – to our best efforts at finding them, there were NO potential sponsors, dollars, or any commitment to actually having a team. It seems he just wanted to blow smoke up a bunch of guys butts for some reason. The thing is it was a REALLY good group of riders that would have been an awesome and talented team. Nearly all of the guys on the squad went on to success in P1/2 races over the next couple of years, albeit on different teams of marginal awesomeness.

There is an amusing/horrifying anecdote to the story. We were on a training ride together a week or so after the final roster had been picked, headed up a Colorado classic, Lookout Mountain. The thing is, Bill was in the follow car and took that to the top. Then he decided to ride downhill with us. Now we were Cat 2 level racers and pretty decent on our bikes, whereas Bill was a prety hefty guy who didn’t really seem that comfortable on a bike. The top few turns are kinda tight and then it opens up into a fast section before a hard left. Well sure enough we get below the switchbacks and onto the fast section and here comes Bill, flying by full tuck, big ‘ol ass in the air, hauling!

All of us could see it coming. He was going way way too fast and the left turn was RIGHT THERE. Sure enough up pops his little head and the bike starts to wobble as he struggles to slow it down. Failing that he just lays the bike down at full flight and SLAMS, I mean SLAMS into the guardrail.

I thought he was dead.

We all thought he was dead. It took a bit to slow down and turn around, during which all of us were of the opinion “I don’t wanna go back”! We did, of course, but he was a mangled mess of road rash and destroyed equipment. I remember putting him in the car for the drive to the hospital and thinking how f’ing crazy it was. I don’t recall the long term outcome, but doubtltess it had lots of pain and oozing. I don’t think the idea of comeuppance is too far from what I feel about it now, and even in the weeks after the truth came out and we were screwed.

In 2007 I was about 6-8 months into working with a tech company that had jumped into supporting cycling in a big way. Indeed the company had put thousands into supporting 2 or 3 local clubs (including the one I rode for at the time), a couple of races, and was even developing a race series during the preceding season. So when they decided to up the ante and fund a race team for the coming year I was really excited! It was basically a dream come true for me. I can remember putting together the pitch deck and coming away from the meeting with nearly $100k in commitments to fund and support the team.

We dived in full force and set up a weekend try-out camp in September. The camp had 2 or 3 “stages”, overnight accommodations for riders and staff at a hotel near their offices, a fully developed assessment process and a group of probably 12-15 bad ass Cat 1/2’s from the NorCal scene. We held the camp, had Olympian and uber-pro Eric Wolhlberg on board as a likely DS, and he even came out to ride the “Heart of Darkness” route with us. It looked to be a totally pro set up! You can imagine how stoked I was.

Alas, it wasn’t to be. For whatever reason the CEO flipped completely. I recall several disagreements with him, devolving into shouting at least once. He was downright inappropriate and absurdly overwrought several times. Behavior I later learned was the norm. I recall one of them was over ownership of team equipment. He asserted that it was his and I disagreed as the agreement was for the sponsorship to come thru my company, as is the norm in cycling. That was a big one, but as I understand it the bigger deal was him spending all that money without any board oversight. They were pissed.

I pulled out of the deal when it became apparent that he had no intention of acting with integrity, even refusing to pay me for agreed upon work and expenses, among other generally dick behavior. I sent an email to everyone in November saying that I wasn’t going to be part of the program, but that it was intended to continue, per his words, “better than ever.” Indeed, they hired a different guy to run the show after me. Did it go? Of course it didn’t! He pulled the plug (or was forced to) on the whole shebang a month or so later.

I was dumbstruck and heartbroken for a long time. I’d dreamed of building a “pro” team for years and there it was only to slip from my fingers. I pulled out after long discussions with my wife about the right thing to do and acting with integrity, but the damage was done. Riders were caught off guard and eventually left in the lurch and I could do nothing for them. I have no doubt that many of them still bear a grudge towards me.

Was I any better than the first scenario? To me, yeah, of course I was. I didn’t lie or make things up, I just got caught in someone else’s deceit, but I wonder. Was I blind to reality? Was I part of the problem? I don’t doubt that I acted a dick on my own – I can be a bit of a hot head when pissed and remember ranting about “my team” to the director of marketing, who was my main point of contact. The comeuppance? Over the first few months of 2008 nearly all of the executive team, including the marketing director, left the company for greener pastures amid a “mysterious exodus” and in early 2009 the CEO left “to pursue other opportunities.” Rumors of his bad, and possibly criminal, behavior floated about, but nothing concrete that I ever saw came of any of it. Last I heard he was still rich and still an asshole.